Chlorine Dioxide
In 2020 I was for 5 month out of work due to the PLANdemic and I had a lot of time to educate myself about more holistic treatment opportunities for my cats.

At the end of February 2020 I picked up two new Birman ladys for my breeding program, Queeny 4 month old and Quarli 10 month old.

Quarli went, barely arrived at her new home, immediately in heat. Every other week she went in heat and eventually she developed an open pyometra. I never had luck in the past to treat successfully a pyometra, but I tried once again. The Vet prescribed 3 different antibiotics in a course of 4 month. Nothing helped, it came constantly back after each new AB round. I also tried a homeopathic mix of pellets, which was successful, but after she was mated it flared up again. My last straw was CDS.
I have never used it before on us or the cats, but I was reading a lot of good experiences from other people about it and I bought already the book from Andreas Kalcker "Forbidden Health: Incurable Was Yesterday".

I bought the components sodium chlorite (NaClO2) and hydrochloric acid (HCI) and made my first batch. It is very easy to make and costs only some penny's.
Then I started to supply Quarli with a mix of 1ml CDS, 1ml water and some drops of heavy cream in a syringe 3 times a day. The cream does cover up a bit the taste of the CDS. Within 3 days the purulent discharge was completely gone and she went in heat again and got pregnant.

The second matter in the beginning of using CDS was the case with our Raffi.
Our Raffi came to us in Juli 2020. Days after he arrived he started to sneeze and snot. It took us 3 month with colloidal silver and CDS to get rid of it, but 6 weeks later in November 2020 he developed Neuro FIP.

The third matter happened in September 2021 with our Queeni. She had a necrotic baby left in her womb and she managed to deliver the baby and discharge of all the gunk on her own after 36 hours. We started with homepathy and CDS and 4 days later the discharge was history.

What is ClO2, Chlorine Dioxide?

Chlorine dioxide (CD) is a strong oxidizing agent that has found many applications in wastewater treat­ment and food disinfection. Chlorine dioxide is just the gas from the reaction of sodium chlorite (NaClO2) activated with an acid, which is very soluble in water and evaporates at 11 ° C. It is made by mixing 28 percent sodium chlorite solution with an acid such as citric acid or hydrochloric acid. With its very simple molecular structure (one chlorine atom and two oxygen atoms), CD spontaneously breaks down into hypochlorite and superoxide. These two molecules are very commonly produced by living cells, particularly by immune cells in response to an infection.

In recent years, it has become a popular treatment choice among alternative medicine specialists for various diseases and conditions, despite the fact that the mainstream medical establishment has come down very hard against it. To say that it is controversial would be an understatement.

It has been observed that many media, especially in large chains, warn of the danger of chlorine dioxide based on an anecdotal testimony that is not scientific at all from an FDA (Food and Drug Administration, USA) statement.

This release warns against taking chlorine dioxide without specifying the amount, concentration, or duration of the suspected toxicity. Claiming that a substance is toxic without even stating the amounts has no validity whatsoever.

Nor can Health agencies around the world cite scientifically proven cases that prove it or studies in this regard and this warning has been distributed throughout the world where health agencies warn copying and pasting this data without any verification.

The history of the invention of CDS (Chlorine Dioxide Solution)

First of all, it is an oxidant, that is, a substance that facilitates combustion because it adds oxygen to all processes, unlike other medicines.

Oxygen does not accumulate in the body and therefore it is a very different pharmacodynamic process.

Furthermore, oxidation is used in a similar and natural way by our defense cells, such as neutrophils in the process of phagocytosis, which is nothing more than engulf and burn the enemy, in a very simple way.

The maximum amount of the recommended Andreas Kalcker (andreaskalcker.com) protocols does not exceed 20 mg daily in adults. To speak of a danger due to the ingestion of chlorine dioxide at these amounts is completely absurd and even more after 13 years of Andreas Kalckers experiences he does not know of any serious problem with CDS. There are thousands of people who have also given their testimonies on the Internet confirming its efficacy and safety at the same time.

How does CDS work?

The therapeutic action of chlorine dioxide is given by its selectivity for pH. This means that this molecule dissociates and releases oxygen when it comes into contact with another acid. When it reacts, it becomes sodium chloride (common salt) and at the same time releases oxygen, which in turn oxidizes (burns) the pathogens (harmful germs) of acidic pH present, converting them into alkaline oxides (“ashes”).

Therefore, when chlorine dioxide dissociates, oxygen is released into the blood, as do erythrocytes (red blood cells) through the same principle (known as the Bohr effect), which is to be selective for acidity. Like blood, chlorine dioxide releases oxygen when it is acidic, either from lactic acid or from the acidity of the pathogen.

What else can you treat with CDS?

As a therapy, quantities of ClO2 produced are small enough not to be harmful, but sufficient to be one of the most effective killers of pathogens. E.g. bacteria, molds, fungus, viruses, bio-film and other microorganisms responsible for the majority of diseases

- Chlorine dioxide is able to oxidize and destroy pathogens (e.g. viruses,bacteria, fungus, protozoa, bio-film) and toxins (including heavy metals, herbicides, pesticides) in the body. Pathogens and toxins are involved in an estimated 95% of diseases and ill-health, including inflammation / pain, chronically low energy, and problems maintaining healthy weight or a normal blood pressure

- Chlorine dioxide is able to destroy unhealthy cells (e.g. cancer cells) in and on the body. 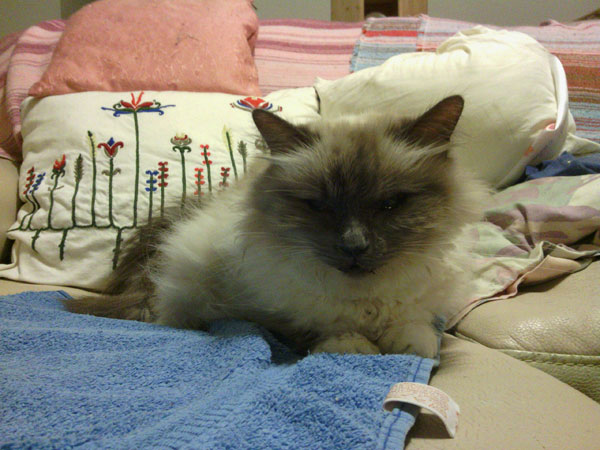 Winter 2012 we must have caught a virus including our cats. Antibiotics didn't help for 2 weeks and 3 of our birmans had to go to the Vet and were treated there with 4 different Antibiotics and stayed under an Oxygen tend for a week. They came back worse and we almost have lost our Baccara. Long story.
Baccara 7 years later 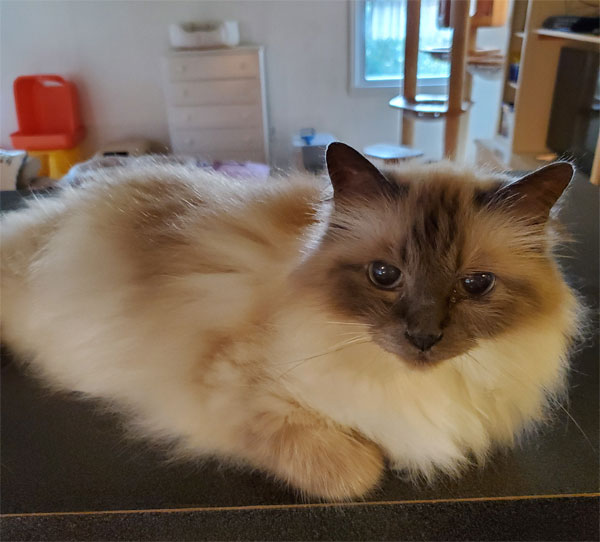