Vaccinosis
Since I have cats in my family, I have experienced 2 Fibrosarcomas in my cats, one just developed on the head and one appeared after a Rabies vaccination between the shoulder blades.
We had also a lot of bad experience after vaccinating our kittens. This goes from allergic reactions to losing kittens at the age of 4 month after vaccinations.
Our Raffi came to us in Juli 2020. Days after he arrived he started to sneeze and snot. It took us 3 month with colloidal silver and CDS to get rid of it, though he was unfortunately fully vaccinated. In November 2020 he developed Neuro FIP. Dr. Pedersen who did a clinical study for FIP in 2019 says clearly: vaccinations are compromising the immunesystem and can contribute to develop this illness. 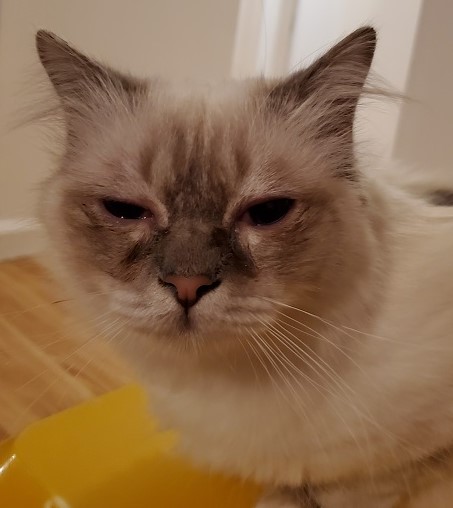 Vaccinosis is now a common problem in our pets but it is far from being normal.
The biggest challenge what animal naturopaths see is that the focus is on disease, disease treatment, and disease prevention rather than on health and promoting health.
With the public focus on disease, vaccines are counterproductive to health, rather bringing about the very diseases they were meant to prevent. In other words, vaccines do not promote health nor are they preventative, quite the contrary.
More vaccines do not convey more immunity and in fact are the very cause behind the declining health we are seeing in pets.

Vaccinosis is a set of symptoms that occurs after the administration of a vaccine(s). These symptoms are more commonly referred to as adverse reactions or events occurring within minutes. However, in many cases symptoms are not noted for months or even until years later particularly in animals that have been repeatedly vaccinated year after year.
While the term vaccinosis isn't a recognized "disease", the body is definitely in a state of "dis-ease" or out of balance. Conventional veterinary medicine doesn't widely recognize this state of dis-ease, however research and facts have been conducted and collected by the naturopathic veterinary community backing the theory of vaccinosis.

What Are The Symptoms of Vaccinosis?

The symptoms vary widely from minor to critical, from temporary or isolated events to chronic anxiety and behavioral problems.
Mild reactions include fever, tenderness or swelling around the inoculation site, "flu-like" symptoms, loss of appetite, lethargy, depression, limping, vomiting, diarrhea, and anxiety.
More severe reactions may include seizures, anaphylactic shock and even death.

Chronic problems may be difficult to trace back to vaccinations, only because the symptoms or the health problems can begin weeks, months and even years later.
However, when we understand what happens in the body when a vaccine is administered, we can begin to connect the dots.
We believe that ALL modern diseases in pets can be traced back to either the direct administration of vaccines or indirectly through genetic transfer.

Vaccinations compromise the immune system rather than enhance it, setting the body up for disease rather than preventing it.

"By vaccinating every individual animal and not allowing it to develop its own immunity, we are effectively preventing the passing of the immunity to the future generations. A vaccine is always made from the most virulent form of the virus since pharmaceutical companies jump on the wagon as soon as the disease appears and the level of fear is at its highest. While in nature this virus would have mutated into a less virulent form, it does not do so in the vaccine. Generations of animals are therefore injected with the worst form of the virus and stripped of their natural immune response which would have been passed onto subsequent generations. What is passed forward instead is deformed DNA, and the destruction of the species must ensue. Vaccinated mothers do not pass on herd immunity, which then puts pups in greater danger of contracting disease while they are very young. By attempting to save the individual animal, we are effectively destroying the species. A healthy species is able to survive without human interference and we are taking that ability away from our animals."
Aleksandra Mikic, from the book Immune Doggy

Dr. Donna Starita Mehan DVM
Health Hazard of Routine Vaccination: placing our animals at risk
"Most pet owners aren't aware of the dangers in animal vaccinations that have been discovered in recent years. The major veterinary associations now agree that vaccinations can trigger all sorts of maladies, from allergies to cancer - but most pet caretakers (and many veterinarians, it seems) haven't gotten the word. "With vaccines that are repeated year after year, the frequency and severity of these side-effects in our pets has increased dramatically. Most of the problems involve the immune system. After all, the immune system is what vaccines are designed to stimulate. But they do so in a very unnatural way that can overwhelm and confuse the immune system."

Dr. Ronald Schultz DVM
"Annual revaccination provides no benefit and may increase the risk for adverse reactions. The percentage of vaccinated animals (those vaccinated only as puppies) protected from clinical disease after challenge with canine distemper virus, canine parvovirus and canine adenovirus in the study was greater than 95%." Current and Future Canine and Feline Vaccination Programs. *Dr. Ronald Schultz is a Professor and Chair of the Department of Pathobiological Sciences at the School of Veterinary Medicine, UW-Madison. Schultz, R.D. - Current and Future Canine and Feline Vaccination Programs.

Dr. Charles E Loops DVM
"The first thing that must change with routine vaccinations is the myth that vaccines are not harmful. Veterinarians and animal guardians have to come to realise that they are not protecting animals from disease by annual vaccinations, but in fact, are destroying the health and immune systems of these same animals they love and care for Homeopathic veterinarians and other holistic practitioners have maintained for some time that vaccinations do more harm than they provide benefits. Vaccinations represent a major assault on the body's immune system. Vaccine induced chronic diseases range from life-threatening conditions such as auto-immune crises to conditions destroying the quality of life of an animal as in chronic skin allergies."

Dr. Dee Blanco, D.V.M
"You take healthy animals and often very quickly after you vaccinate, you can see simple things like itching of the skin or excessive licking of the paws, sometimes even with no eruptions and licking of the air. We see a lot of epilepsy/seizure, often after a rabies vaccination. Or dogs or cats can become aggressive for several days. Frequently, you'll see urinary tract infections in cats, often within three months after their [annual] vaccination. If you step back, open your mind and heart, you'll start to see patterns of illness post-vaccination."

Dr. Pat Bradley, DVM
"In a general and frightening context, I see the overall health and longevity of animals deteriorating. The bodies of most animals have a tremendous capacity to detoxify poisons, but they do have a limit. I think we often exceed that limit and overwhelm the body's immune system function with toxins from vaccines. The most common problems I see that are directly related to vaccines on a day to day basis are ear or skin conditions, such as chronic discharges and itching. I also see behavior problems such as fearfulness or aggression. Often guardians will report that these begin shortly after vaccination and are exacerbated with every vaccine."

Dr. Dennis Macy DVM
"We should not allow politics and tradition or greed to enter the decision (on frequency of vaccination). Changing vaccination schedules doesn't have to mean less profit, but that you have more income from some clients and less from others. Veterinarians and the industry need to have guts to be honest with ourselves and assess the risk and not be trapped in tradition."

Dr. Christina Chambreau, DVM
"Routine vaccinations are probably the worst thing that we do for our animals. They cause all types of illnesses but not directly to where we would relate them definitely to be caused by the vaccine. Repeating vaccinations on a yearly basis undermines the whole energetic well-being of our animals."